We have two Christmas concerts at the Haydock Conservative Club coming up as usual, and as of this morning our concert on 20th December is officially SOLD OUT! But we still have some tickets left for the 13th, so if you want to come to one of our fantastic Christmas concerts, get in touch with our treasurer NOW on 07890023563 so you don’t miss out!

Everyone at Haydock MVC sends our condolences to the Royal Family and the whole nation at the passing of HRH Queen Elizabeth II.

We have filmed a tribute to the Queen, which we present to you here.

If you’re not already a member and want to know more, check out our 200 Club page right here on the website, or contact committee@haydockmvc.com for more details!  You have to be in it to win it!

A great night at the Gustaffson Launch Party
This last Saturday, our friends at Gustaffson Music held a highly successful launch night for their debut E.P, and longstanding Haydock MVC Top Tenor John Greenall was on hand to get a drink or two, and also to give this brilliant report on the night:
On Saturday 20th August 2022, the famous Jacaranda Club in Liverpool echoed to the Sound of the very gifted alternative Rock Group Gustaffson supremely led by talented Actor/Songwriter and lead singer Andrew Gower as they celebrated the launch of their debut E.P. “JACARANDA”. The packed audience, mainly Andrew’s family, friends and group supporters including Craig Potter, Producer from ELBOW, were treated to a live performance of all four tracks on the E.P. I managed to have a chat with Andrew prior to them going on stage, highlighting the contribution of Haydock MVC on a couple of the tracks. We provided backing track inserts on “Kingdom” and “Night People”. Andrew very kindly acknowledged the important contribution from Dan Craddock and the guys from Haydock MVC. I am proud of my very long association with Haydock MVC and the very progressive attitude to modern day Tenor/Bass Chorus. Under Dan’s leadership, we are experimenting quite successfully with confident Acapella singing and are always willing to expand on our wide and varied repertoire. Check out the E.P. on Spotify, Apple Music etc… It’s worthy of a good listen. The guys from Gustaffson are really going places, as are Haydock MVC of course! Young tenor/ bass enthusiasts are always welcome here at Haydock.
John Greenall
Big thanks to John for that report, and as he says, if any young tenor or bass singers are interested in seeing what we’re about, the singing workshop is only a short time away now, so get in touch at committee@haydockmvc.com for more information, and to secure your place!
Gustaffson livestreamed the launch party, if you want to check out their video then click here!
Our own John Greenall also filmed part of the event, which you can find by clicking here!
The Singing Workshop is back!

Ever wanted to join Haydock MVC but not known where to start? Our singing workshop is for you! Starting on 6th September and running for six weeks across both our weekly rehearsals, you’ll get a welcome pack with a handbook, sheet music and more, and be assigned a mentor in your section to help you get used to choir life! For more information or to book your place, contact committee@haydockmvc.com now!

If you’ve been anywhere near our facebook page in the last month or so, you’ll doubtless have seen an advert for our BRAND NEW Six Week Singing Course!  The course starts next Tuesday, April 26th, 7.30pm at Haydock Conservative Club.  It doesn’t matter what level of singing ability you have, the course caters to people who haven’t sung before just as much as to those who have!  You’ll receive a handbook that tells you all about the basics of learning to sing with the choir, as well as music of the pieces you’ll learn during the course, and you’ll be assigned one or more mentors to sit with you and help you learn at rehearsals!  If you want to know more, or to secure your place on the course, please contact secretary@haydockmvc.com now!

“A wonderful night of musical entertainment!”

On Saturday 26 March a full house waited in anticipation for what would prove to be a wonderful night of musical entertainment.

Playing host for their first concert at St Helens Town Hall for two and a half years, HMVC welcomed the renowned Rossendale MVC, most ably directed by Matthew Thomas, together with The Parr Band led by Haydock’s own Musical Director, Dan Craddock.

Haydock MVC started the evening with a powerful selection of songs based on hymns: How Great Thou Art; And Can It Be; and finishing the section with Grace, an arrangement of Amazing Grace. All three showed the choir to be in fine voice, and were each greeted with rapturous applause from the audience.

As Haydock left the stage, The Parr Band played their first piece of the evening, a rendition of Doyen, which was warmly received. Then Rossendale MVC took to the stage for the first time and started with Fionnghuala, a traditional Scottish Gaelic song, which was a treat for the ears. The Seal Lullaby followed, a choral adaptation of Rudyard Kipling’s poem, by Eric Whitacre. The section finished with Anthem from Chess, which the choir dedicated to the people of Ukraine. This last rendition in particular caught the mood of the evening and the applause was warm and prolonged.

As Rossendale left the stage, The Parr Band played their second number entitled Ukrainian Prayer, which had been composed in the last month by Andreas Wetterlands. This was The Parr Band’s tribute to those in Ukraine.

HMVC’s second set found them in a more sombre mood with a rendition of How Soon, remembering loved ones lost to the pandemic, followed by Stars I Shall Find. This last was dedicated to anyone suffering with mental health issues. They finished with Bring Him Home from Les Miserables – Haydock’s own tribute to the Ukrainian people.

The first half ended with both choirs singing Homeward Bound, conducted by Matthew Thomas. The sound of seventy voices on stage was wonderful both to behold and see.

The second half began with Rossendale’s What Shall We Do With The Drunken Sailor, followed by The Sweetest Kick. The last song of this section was an arrangement of the Oasis hit Don’t Look Back in Anger.

Following this was The Parr Band’s own version of Amazing Grace, arranged by William Himes.

Haydock started their final set with O Se Shalom, followed by regular crowd pleaser We Rise Again. Then there was the ever popular New York, New York, and the choir finished with a vigorous rendition of When The Saints Go Marching In.

Rossendale then returned for their last set, Sing Your Way Home, and Seize The Day, which we were informed had been named ‘Song of the Competition’ at the Cornwall International Choir Festival 2019.

Presentations were then made to the accompanists and the musical directors –  most notably by Rossendale, marking the retirement of their accompanist, Michael Farnworth after 53 years.

The last item was American Trilogy, sung by both choirs, and conducted by Dan Craddock.

This capped a great evening, acknowledged by the audience with much appreciative applause.

We can now all look forward to Haydock’s next concert to be held on Saturday 28th May at St Helen’s URC. Thanks go to all those who took part as well as the organisers, and, last but by no means least, the enthusiastic and very appreciative audience! 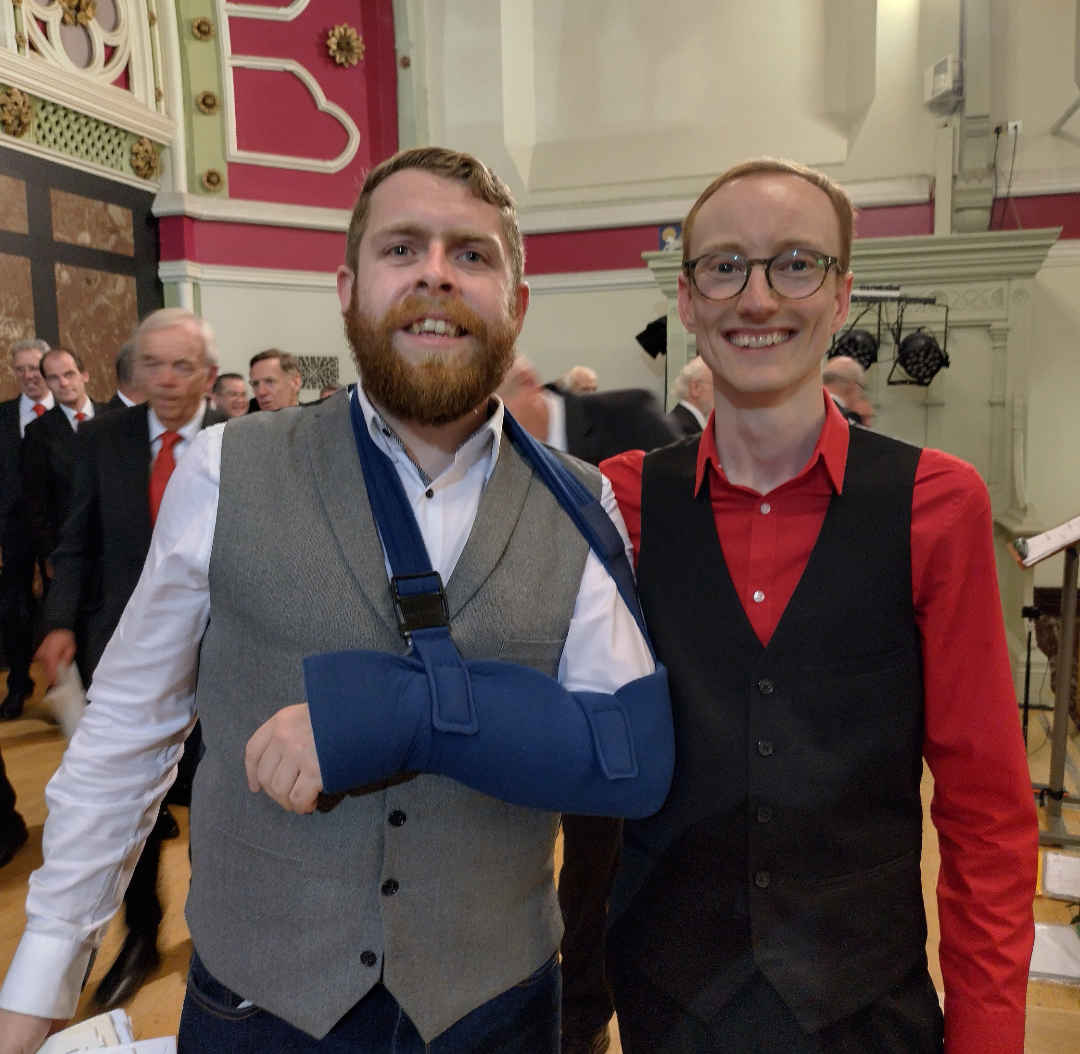 Happy Birthday to us!

On Tuesday 1st March we held a most joyful evening celebrating our 99th birthday! It was a real honour to share the stage with old friends, and still meet new ones in those who shared our festivities! Being 99 years old feels pretty good!  This is just the beginning of a year-long countdown to our centenary in March 2023, when the celebrations will REALLY begin!  Look out for more photos from our 99th Birthday Party later this week!

After a FANTASTIC Christmas season that saw the choir hold their first concerts in 2 years, we are now in full rehearsal mode for what we hope will be a full and exciting year!  This will see us learning a number of new pieces, polishing up some existing ones, and bringing back some older ones that haven’t been sung for quite a while!  Our first concert is on 26th March at St Helens Town Hall, and sees the choir share the stage with Rossendale MVC, a concert which was originally planned for 2020, and one which we are extremely excited to bring to you all!  We are currently finalising the details of the rest of our concert schedule for the year, but keep checking the diary page, and our Facebook page, for up to the minute details!